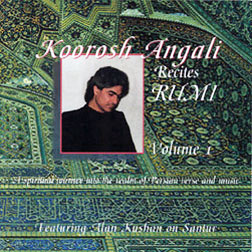 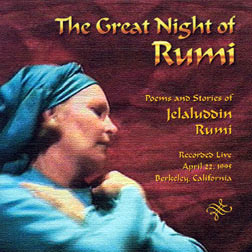 Since 1980 many albums have been released which Koorosh Angali either has conceived them, or has collaborated on them as a gust artist. Within the albums on this page, Koorosh Angali Recites Rumi (1997) was entirely conceived and realized by himself. In addition to reciting a selection of Rumi's odes, he composed the music and played the keyboards and the overdubbed percussion on it, accompanied by the santur virtuoso Alan Kushan (whose improvisations definitely laid a colorful glaze over the entire project. It was financed and distributed by X Dot 25 productions, Inc., at the San Francisco Bay Area. The Child Within (also an X Dot 25 Productions) was released in 1992 by the band Aldoush & the Human Exchange. In addition to the illustration (see Illustrations), Koorosh Angali designed the cover in three different occasions, between 1992 and 1998, upon the request of the releasing company, X Dot 25 Music Productions Inc., that wished to update them every so often (see the CD designs). Koorosh also wrote all of the Persian lyrics for the album. In 1993 the album won the first place in the World Music category by the San Francisco Weekly magazine, in their annual Wammies Award contest (see Wammies under Music). The Great Night of Rumi is a live recording at an event that was held at Berkeley, California, in celebrating the Persian poet/philosopher. It was released by the Mahatti Records in 1996. On The Mystery of Semā' ('the dervish dance') by Hafez Modirzadeh, a jazz musician and saxophone player, and a professor at the San Francisco State University, School of Music, Koorosh is a guest performer, reciting a selection of Rumi's odes from the Miscellany of Shams Tabrizi, accompanied by the Bay Area artist Baomi Butts-Bhanji. The album was recorded and released in 1997.

Here are two tracks from the album Koorosh Angali Recites Rumi: Volume I:

The followings are two tracks from the album The Child Within by Aldoush & the Human Exchange: