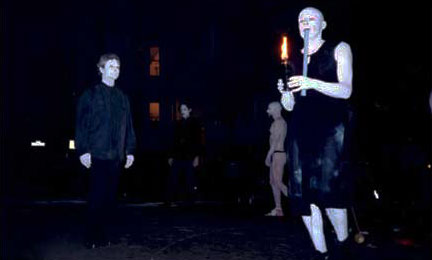 In 1996 Koorosh joined the InkBoat Butoh Dancers Company, whose performance pieces were based on the Japanese traditional Butoh dancing, and was founded and directed by the San Francisco Bay Area based Butoh dancer Shinichi Momo Koga. Angali performed in several of their performances as a reciter of poems. The piece in the picture was staged in 1997 as a street performance in San Francisco. The story was based on one of Rumi's verses, which was recited by Koorosh during the performance.