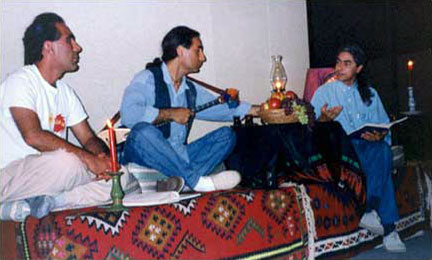 In 1994 Dr. Angali, as an expert on the Persian poetry and a reciter of poems, conceived a project to bring one of Sohrab Sepehri's volume-long poems titled The Voyager onto the stage. As one of the greatest of the Persian poets, and as a contemporary Rumi, though composing his poems mostly in free verse, Sepehri has always inspired Dr. Angali on a very personal level. He performed it along with Aldoush Alpanian, of the Aldoush & the Human Exchange band (on the instrument), and Roham Sheykhan, an inspiring and well known Iranian playwright, director, performer, and poet from the San Francisco Bay Area, with whom Koorosh has collaborated on many projects, both, as an actor and as a composer of background musics, tunes, and theme tracks. This includes a stage performance tilted The Wise Piglet Opera and Ten Other Stories (1993), which included a satirical opera piece (samples of music here), based on The Three Little Piglets (1840), and for which Koorosh composed all of the different scenes music, as well as a forty-minute long opera. He also collaborated with Sheykhani on the story's final draft, and edited the lyrics for the opera.