Ironically, Balzac's The Unknown Masterpiece (Le Chef-d’œuvre inconnu) has itself remained "unknown" to many readers, probably due to the fact that it was first published as an article in a newspaper in 1831, and later on it was only published along with several other stories in the compilation Comédie humaine in 1846. Koorosh Angali has translated the book into Persian, using an English translation by Michael Neff, and a French text (as reference for accuracy). Since there are artists, movements and styles discussed within the pages, and an Iranian reader might not be familiar with them, he decided to add an addendum in which he has "authored" a relevant "art history," including the biography and works of the artists discussed. This would be the first time in the history of book translation that such an addendum has been added to a volume by the translator--a credit on the translator's part. Now available by M. M. Bookly publishing co., Fall 2019. 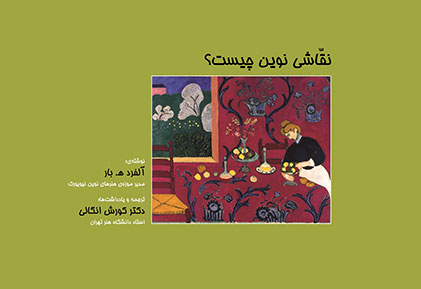 What is Modern Painting is a book written by Alfred H. Barr, the first director of the New York Museum of Modern Art. It is intended to instruct non-artist audience and visitors of the modern art museums as to how to look at a modern painting and what to look for. By pairing and comparing traditional and modern canvases, he has guided the reader, step by step, through a fascinating journey in the mesmerizing world of Modern Painting. The Persian volume is presented by Fakhrakiya Publishing co., 2020.