As a scholar in the field of Iranian Studies, Dr. Koorosh Angali has been tirelessly active, lecturing and publishing articles and books in the areas covering Persian culture and language. He wrote his Ph.D. dissertation on the linguistic aspects of the Angāli dialect, his ancestral dialect, which is spoken in parts of the Dashtestan province, in the south of Iran. In this work he also included a large selection of invaluable materials, such as the local vocabulary, children's tales, games, proverbial compilation, and other folkloric materials. As a record of what is left of once a prosperous dialect, this compilation is an indispensable repository of the characteristics and aspects of a dialect which is unfortunately on the verge of extinction, like many other Iranian local dialects. 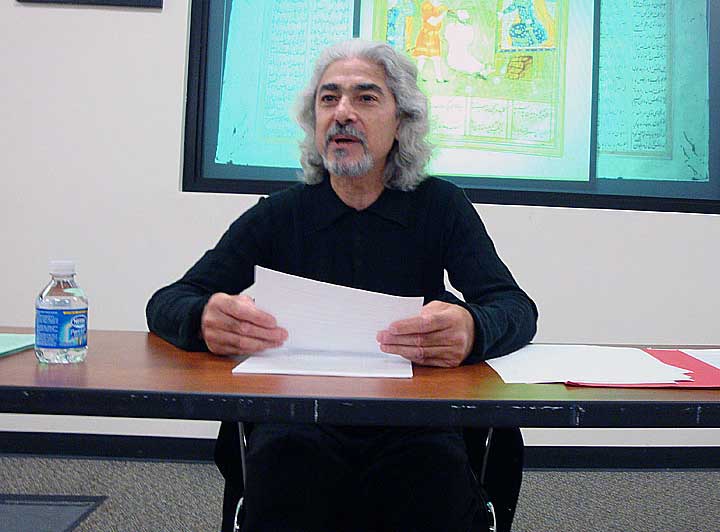 Ferdowsi Conference, The University of Texas at Austin; April 27, 2009.

PUBLICATIONS AND PAPERS (SELECTED)
In Search of One’s Own Self, A compilation of Koorosh Angali's poetry in both traditional style and the free verse style, Nashr-e Ketab Publishers, Los Angeles, California, 1995.
“The Progressive Auxiliary Particle in the Angāli Dialect,” Iranshenasi, Vol. XIX, No. 2, Summer 2007.
Two Centuries of Ruba’i in Bushehr; a selection of Koorosh's ruba’is is included, Tehran: Lyan Publishers, 2007.
With No Favors from the Rain; a selection of Koorosh's poetry in included. Bushehr: Shoru’ Publishers, 2007.
“Who Killed Sadegh Hedayat?” Iranshenasi, Vol. XX, No. 3, Fall 2008.
The Unknown Masterpiece, by Honoré de Balzac (translation), currently under print.
Advanced Persian Reader, with Michael Craig Hillmann; Dunwoody Prints, under print.
A Dictionary of New Persian Words, with Michael Craig Hillmann; currently being edited by the publisher.
The History of Sculpture, currently under print.