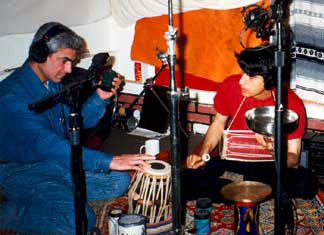 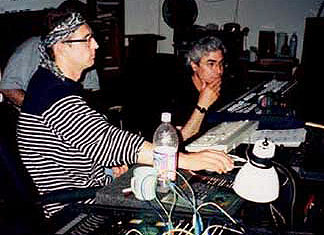 Left: At the studio with Alan Kushan (the santur virtuoso) during the overdubbing of the percussions for the album Koorosh Angali Recites Rumi (X Dot 25 Music Productions, Inc., 1997, more info. at other arts>music>CD releases). Here we see him playing the Indian tablas. Middle and right: At Sonodrome Digital Lab, San Francisco, with Konstantine Barnov (engineer, center) and Matt Amadi (right), the executive producer of the X Dot 25 Music Productions, inc., during the post production of the album Valeh, for which Koorosh composed, arranged, and sequenced all of the tracks, as well as composing the lyrics (1999).